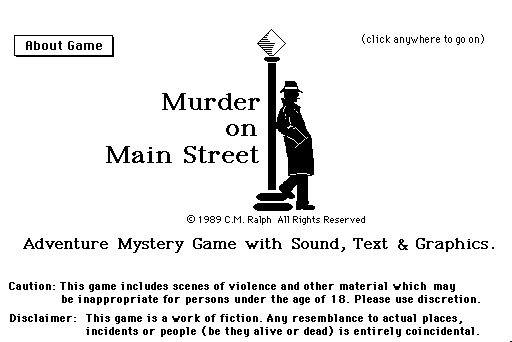 "Murder on Main Street", published by Heizer Software, is the heterosexual version of the earlier game "Caper in the Castro" - a gay and lesbian murder mystery problem solving game, written by the same author.
To play the original version of this game, and get links to context about the game, please visit this entry.

Reviewer: Kerry Ward - favoritefavoritefavoritefavoritefavorite - December 7, 2021
Subject: Quasi-historic, challenging, & immersive
Murder on Main Street was written by CM Ralph in 1989. It served as the heterosexual alternative to the historic Caper in Castro, the earliest known video game to focus on queer themes. The two games were published in the same year by Heizer Software. The intended user for this game are mystery game enjoyers, more specifically ones who did not want to play or did not seek out the queer version. The game mechanics are simple and easy to follow, and the tutorial and instructions make the game accessible to people with little computer or gaming experience. The game is first and foremost entertainment; it tells a story which engages the player. While the game is open to all ages, it does require problem solving that can prove difficult for people regardless of age.
This stack works in a fashion that is similar to other hypercard-based games at the time. The cards function as locations which are interconnected. The navigation between cards is designed as a map in-game. Similar to most point-and-click games, the goal is to solve the presented mystery by travelling to locations, interacting with objects and people therein, and utilizing the items collected to learn more information. I would recommend Murder on Main Street. It’s a quasi-historic, challenging, immersive storytelling experience.
Reviewer: clshea - favoritefavoritefavoritefavoritefavorite - April 25, 2020
Subject: Really fun!
Murder on Main Street is a stack that was written by CM Ralph in 1989. This stack is a murder mystery style game for users who want to play a highly interactive game where you are the detective who must solve a murder. The game itself is pretty straightforward. You have certain tools you can choose to use at different times, as well as a map that allows you to travel to different buildings and into different rooms. Furthermore, you can directly type in commands to indicate if you want to open something or speak to someone. There are a lot of intriguing clues, such as strange codes and numbers and it can be fairly tricky to discover them. For example, one of the codes is discovered only when the user decides to use the lighter tool on a discovered piece of paper. The fact that this game is tricky is what makes it fun, though! This game is not only aimed at children; people of all ages will find it to be fun, interactive, and intriguing. I definitely recommend it!

Uploaded by HyperCard Online on December 20, 2017